I’ve been requested to be genuine to the “other delights” and include the meals that I make for myself. So, here goes! Last Monday (January 4), my parents went to the Chinese grocery store and loaded up my refrigerator with … END_OF_DOCUMENT_TOKEN_TO_BE_REPLACED

Happy New Year! And I am back. It has been quite the valiant effort to grow accustomed to this city of dampness, and I think I have a better sense of focus as I enter this year 2016. I am … END_OF_DOCUMENT_TOKEN_TO_BE_REPLACED 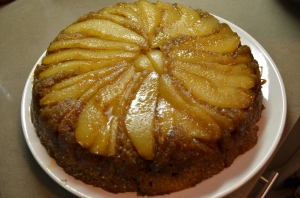 When Bartlett pears are on super sale at the local grocery market, you buy them before you really process what you’re going to do with them. They’re just so delicious in anything baked! So yesterday, when I was walking out the door for work and I smelled my brown bag of pears, I knew it was just about time for me to make those pears into something delightful.

I’ve never made an upside-down anything before, unless it was a layer cake and there was a bad side I needed to hide, and this was quite an experience and really straightforward! Upside-down cakes apparently exist because of cast iron skillets and baking in them. Since I’m already obsessed with my cast iron (it’s stored on top of my stove because I use it essentially every time I cook), I figured, why not find another awesome way to use it? I found this recipe from New York Times (they have a Cooking section, what??) for Upside Down Almond-Pear Cake.

I don’t have a blender or a food processor, so I can’t finely grind blanched almonds. What I do have, however, is seedless almond flour, which is kind of the same thing if you finely grind the blanched almonds finely enough. I found the first part, preparing the skillet, the hardest part in terms of timing. I didn’t want my pears to brown before going into the oven, so I did the first half of step one (melting butter and sugar), then completed step two before going back to the second half of step one (peel/core/quarter the pears). The bad decision about that was I had to reheat the butter and sugar so that the pears could set in them.

Is the butter/sugar mixture supposed to be super melty or kind of liquidy or solid? Unclear. The mixture did come up around the sides of the cake batter once the batter was poured in… Is that right? This is only the second upside-down fruit cake that I’ve ever eaten… Any insight would be very much appreciated! 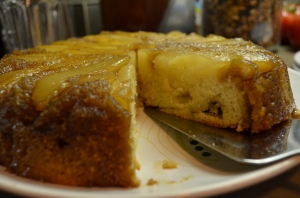 I think it turned out marvelously! I was very nervous about flipping the cake because cake-flipping is not in my practice and I typically fail (see the comment about upside-down cakes because of decorative necessity), but because my cast iron is kept well-seasoned and there’s so much butter that goes into the butter/sugar mixture, the whole cake just plopped right out!

The cake is on the denser side, definitely not a fluffy cake. I love the soft pear with the slight crunch of caramelized sugar and the gentle cake cushion that slows the teeth as they take a bite. Simply a delightful combination of textures!

I think next time I’ll use less sugar for butter/sugar mixture though, because the brown sugar is a bit overpowering and these pears were perfectly ripe–no need for extra sugar!

I have about 13/16 of this cake left… so it’s probably going to go to work with me on Monday. But you’ll probably only see half of the cake! 😉

Happy Labor Day! I woke up bright and early at 7am (and yes, today it was bright out!) and decided it was a wonderful day to try making egg waffles, and to replenish my granola supply by making some of my own. 🙂 Happy day indeed! Be warned, the post is heavy on the words and light on the pictures.

I found two recipes: egg waffle recipe and granola recipe. I followed the first recipe as best as I could because I don’t yet have a scale (yes, an abomination I am well aware). And I used the second recipe as a guidance, not so much a rule-book.

Let’s begin with the egg waffles:

Every time my family goes to Hong Kong, we always hunt down an egg waffle stand and buy the delicious treat: crunchy on the outside, slightly doughy on the inside, and piping hot off the pan. Even better was when we went to Cheung Chow and waited for half an hour for a 90-some year old lady (maybe she was 80-some) to make us the most amazing egg waffles we have ever had. It was incredible! Perfectly sweet and fluffy and crunchy and doughy and hot… I’m going to stop now before I drown my computer in my saliva.

As a housewarming gift, my sister sent me an egg waffle pan with the note included reading: I expect perfect egg waffles when I get there for Thanksgiving. Maybe it was not so demanding. In any case, why not? It’ll be fun! And if I do master egg waffle wieldery, maybe I can also become a 90-some year old lady who has a ten person line out the door of patient people waiting for my perfect egg waffles.

The recipe is super straightforward aside from some weird stuff I don’t stock in my pantry: evaporated milk, tapioca starch, and custard powder. I couldn’t find the custard powder, but another recipe said it was optional, so I didn’t sweat it too much. I think the biggest issue I had was understanding how to use the pan. It’s like a normal waffle, only you can’t flip it over too soon after you put the batter in, you have to evenly distribute the dough across the pan so the insides of the “egg” are hollow, flip over the pan at the right time so that the dough is still runny enough to fill the other half of the mold, you have to make sure you take it off heat so that it doesn’t burn, AND then you have to expertly remove the waffle from the iron to roll it into the shape that allows the waffle to cool enough to touch but not get too soggy.

Actually though, look at this photo: 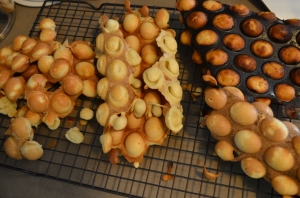 The leftmost was the first attempt, to its right is the second attempt (most successful attempt), in the upper right corner is the third attempt (dat burn doe), and in the lower right corner is the fourth attempt (semi-successfully hiding the burn?). Clearly, I have a learning curve to deal with here. And since the recipe only calls for two tablespoons of evaporated milk, I have a can left in the fridge that will go bad shortly. Another adventure this weekend? 😀 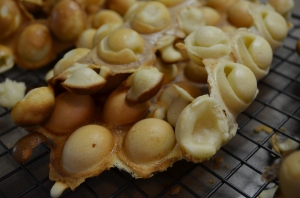 ^^ This is my unabashed attempt to claim that today was not entirely a failure in this endeavor. It looks… decent. Maybe? I hope to have more truthful photos of egg waffles shortly!

Now for the greater success: granola! 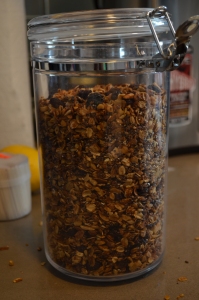 For how cheap the ingredients of granola are, it’s incredible just how much people ask you to pay for it. $12 for a pound? No thank you! It’s just rolled oats, oil, and dried fruits! Well, and honey or maple syrup, and it might be organic, and maybe it also has fancy things like coconut shavings and agave nectar. But really. I made so much granola today for way less than $12/pound, AND I have left over ingredients. The hassle is really just stirring the mix in the oven every fifteen minutes for an hour and a half. But that’s not that difficult if you’re working in the kitchen any way. Do some dishes. Stir the granola. Clean the counters. Stir the granola. Put the receipts that have created an unruly pile into an orderly pile. Stir the granola.

My mix was: 5c rolled oats, several large spoonfuls of chia seeds, large spoonfuls of flax seed, a couple spoonfuls of sunflower seeds, 3/4c slivered almonds (note: not “silvered”, “slivered”), and 3/4c walnuts. Instead of maple syrup, I used Arizona honey (bringing it to my roots). I did use vegetable oil… Next time I’m going to use coconut oil though, I think the flavor will be nicer.

Super easy, really delicious. Mine are slightly burnt, so they’ve got a slight smoky flavor to them that I rather like.

Thanks for reading! I hope some of that made sense… 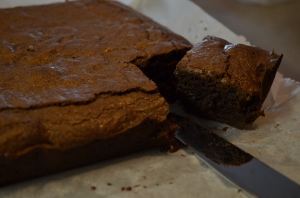 The weather has taken a turn for the worse… It’s officially Fall in Seattle as the cloudy gloom has begun to settle in and the cool Summer evenings have turned cold. Besides the tell-tale markers of feeling compelled to wear sweaters to work rather than cotton button downs, my coconut oil is now solid. A feat it has not achieved since I bought it over two months ago.

But, this very grey weather does have its benefits! It makes me much more desperate for chocolate in any form, and so, I present to you, today’s chocolate dessert/snack/lunch. Made as I chow down on chocolate chips.

I used Martha Stewart’s recipe found here and found it to be quite satisfying. I like my brownies to mostly be chocolate, and here we have half a pound of chocolate, a stick of butter, sugar, and some flour. I do like this recipe. I don’t recall what percent dark bitter-sweet refers to, but I made these brownies with 75% dark because that’s the chocolate I happened to buy last night at the grocery store.

Any way, here’s to cloudy mornings! We’ll definitely be seeing more of those… And chocolate-themed desserts. 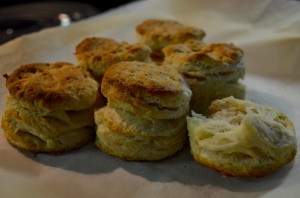 My boyfriend is coming to visit! Super exciting news. But he has a super early flight in, but doesn’t get in before I leave for work… Which leaves a conundrum of what he will eat in the morning, because I have very little food in my refrigerator. I was first thinking brioche. Then thinking scones. But I didn’t want to buy too much stuff, so I decided on biscuits!

I’m using this Food Network recipe for “Southern Biscuits”. It’s easy, straightforward, and look at those flakes! The biscuits doubled in height as they baked, thanks to the 4 teaspoons of baking powder. I didn’t use shortening, because I’m not about that life. And I substituted Half&Half for buttermilk. So these are ultra fatty biscuits.

They’re plain as can be, which means butter and jam will definitely be needed. They’re very yummy though! Plenty flaky. So I’ve left over half of the dough in the refrigerator to throw more in the oven tomorrow morning before I leave for work!

For now, these few will accompany my dinner tonight and lunch tomorrow. 🙂

I saw a dietician last week as a part of this new-member thing at my local gym. She had some good ideas and she had some bad ideas. I’m proud to say that I’ve combined a bad and a good … END_OF_DOCUMENT_TOKEN_TO_BE_REPLACED

“WHAT? That’s not a picture of cookies,” is probably what you’re thinking. You’re right. These are blueberry bushes! I went blueberry picking at the U-Pick farm, Bybee Farms. It’s in North Bend, WA, which is just about the cutest town … END_OF_DOCUMENT_TOKEN_TO_BE_REPLACED

I’ve made these before! I wrote about them here. Except this version is not whole wheat. This one is the all-purpose unbleached flour version. This is the I also did the whole milk substitution again, because the grocery store only … END_OF_DOCUMENT_TOKEN_TO_BE_REPLACED

Today, I went to Vancouver, BC with a couple of friends. Since we were driving up, we had to have a couple of snacks to tie us over so that we wouldn’t die of hunger sitting in the car, waiting … END_OF_DOCUMENT_TOKEN_TO_BE_REPLACED

Desserts, Pastries, and Other Delights
Create a free website or blog at WordPress.com.